The Chief Minister said the programme will involve activities for awareness generation and community mobilisation through Shramdaan, Clean & Green Drives and Swachhta Rallies during the September 15 – October 2 period.

He appreciated the district administration for initiating the ‘Waste Segregation’ initiative in collaboration with DUDA to encourage use of biodegradable bags (green color for dry waste and yellow color for wet waste) to be used within township area. The bags are available at DUDA office for nominal rate.

The CM said under the initiative of PM Modi, the coverage of toilet facilities in the country has risen to 90% from 40% within four years. He said in Arunachal ODF scheme has been dovetailed with the centre’s scheme with additional incentive of Rs 8000 extended by the state government above the cost ceiling of Rs 12,000 fixed by the Central government, thus raising the cost of each individual household latrine to Rs 20,000. 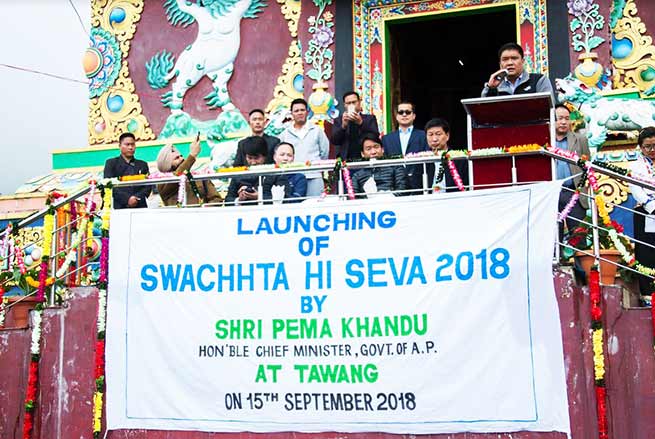 He thanked the contributions of PHED department, villagers, panchayats, community bodies towards the achievement of 100% Open Defecation Free status by Arunachal. He further called the people to extend their cooperation in making the Jan Andolan movement a success.