Arunachal Pradesh celebrated ‘Indigenous Faith Day’ on 1st December. The celebrations were held with religious fervour at different towns including Itanagar Capital city. The day is celebrated to protect and promote the indigenous faith and tribal tradition to keep the ethnic identity of the local tribes.

In ITANAGAR:   Arunachal Pradesh Chief Minister Pema Khandu attended the celebration as the chief guest. On the occasion Chief Minister appeal to the elders to teach their young ones their native language and urge the young ones to speak in their native language at least at home. If any of our language dies, the connect to our cultural identity will die,” he said.  The Chief Minister appreciated the efforts of few community based organizations for conducting folklore/folksong competitions on social media platforms during the lengthy lockdown periods. The celebration was also attended by Education and Indigenous Affairs minister Taba Tedir, Rajya Sabha Member Nabam Rebia, senior leaders, IFCSAP members, representatives from districts and others. 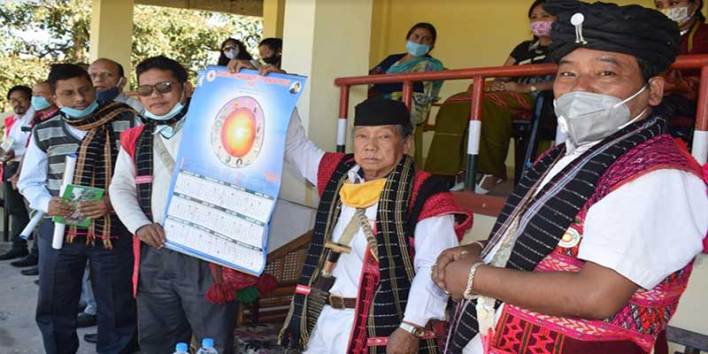 In TEZU: The celebrations were held at Jubilee ground with religious fervor. Despite COVID pandemic, Communities from all faith & culture in their best traditional attire flocked together at the ground to rejoice the festivity. Participating as chief guest on the occasion, Tasaso Yun senior social worker of the Mishmi community highlighted the essence of ‘Indigenous Faith Day’ and insist everyone to carry forward in one’s life emulating their offspring ensuring better protection, promotion and preservation of old – age cultural heritage of Arunachal.

The Indigenous Faith Day was earlier celebrated on 31st December every year under the aegis of IFCSAP. However, as 1st December happens to be the birth anniversary of Golgi Bote Talom Rukbo, regarded as the father of the indigenous faith movement, the day is celebrated on this day since 2013.