Deputy Chief Minister, Chowna Mein while attending the inaugural function of the festival at Medo greets the people of Mishmi Community on the occasion.

He lauded the Mishmis as one of the finest craftsmen of the State and appreciated them for jealously maintaining their rich cultures and traditions. Exhorting the people to maintain, promote and propagate the age old rich cultural heritage of various ethnicities of the State, he said, “we should never let it go.

This is the identity of our society and the beauty of Arunachal lies in our multiplicity. We must maintain it at any cost while upholding the spirit of unity in diversity”.

He further said, “Eastern Arunachal Pradesh has huge potential of agriculture, horticulture and tourism industry. But for the development to happen, road connectivity has to be improved.”

He added that with the improvement of road connectivity in the eastern sector especially to Namsai, Lohit and Lower Dibang Valley Districts after the completion of bridges over the major river systems like NoaDihing, Lohit and Dibang rivers, these sides of the State has witnessed tremendous increase in tourists inflow.

He informed that only Namsai district has recorded more than one lakh footfall of tourists in the last year.  He further said to improve the infrastructures at Parashuramkund to make it more attractive and tourists friendly.

However, citing compensation as one of the main caused of delay in execution of various road projects in some parts of the State, he appealed to the people to change their mindset and to develop a developmental oriented mindset for over all progress of the State. 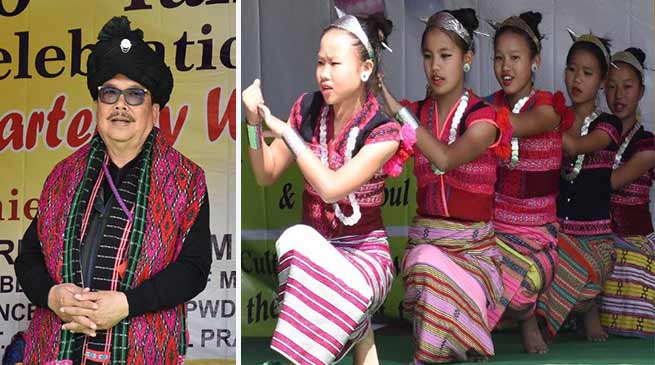 Highlighting various initiatives of the Chief Minister Pema Khandu led Govt in the last two and half years of its governance, he said that our Govt is a people friendly and inclusive Govt which aimed to provide a corruption free and transparent governance to the people.

He added that the Govt has drawn a proper road map for development of the State and has a strong political will.

He, further responding to the six points memorandum submitted by the public on the occasion, said to look into their demands and incorporate them in the next budget.

Famous Folk Dance of Digaru Mishmi, Tangong and Modern dances were present on the occasion. He also laid the foundation stone for the Tamla-Du Open Hall and inaugurated the Golden Jubilee Celebration of Tamla-Du Festival by unfurling the festival flag.

Earlier, Mein also laid the foundation stone for the establishment of Ekalavya Model Residential School at Medo. The school which is funded under the Ministry of Tribal Affairs, Govt of India will be the third of its kind in the State and the Engineering Wing of the Education Department is the executing agency.

The people of the area has donated a vast plain land of 7.3 acres for the establishment of the school, the construction works of which will be started soon as the approach road and compound walls have already been completed.