A picturesque small village nestled admist small hillocks is hoisting the Golden Jubilee Nyokum celebrations this year. The 16 days cultural extravaganza has attracted a number of tourists and delegates from all over the state with the last few days of the celeb rations being the cynosure. 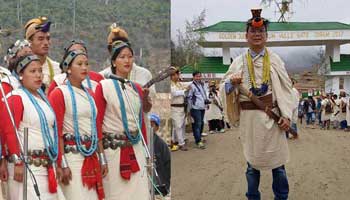 When Joram doesn’t have a single lodging facility nor a guest house, accommodation would have been a major issue, but for the initiatives taken up by Dr. Joram Beda, IAS, Secretary Tourism in initiating installation of luxury tents in the festival vicinity in collaboration with Mumbai based PEEPAL Company .  The luxury tents will have a bedroom, living room and shower facilities.

Dr. Beda expressed hope that the pilot scale initiative will ensure comfortable stay to our tourists and appealed to all the people of Joram to ensure the best hospitality.

He further added that these tents would solve accommodation problems of important festival venues across the state in future. 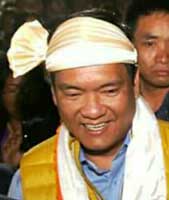 Chief Minister Pema Khandu has extended warm greetings to the people of Arunachal Pradesh particularly the Nyishi brethren on the auspicious occasion of Nyokum Yullo festival.

In his message, Khandu said,  “Greetings on occasion of Nyokum Yullo! Ours is a distinct state with several tribes and communities residing side by side for ages and maintaining their own unique indigenous culture and traditions. Despite our varied diversity, we as Arunachalees are united and take pride in our indigenous cultural heritage. This cultural mosaic has to be maintained, preserved and propagated at all costs while keeping intact our unity in diversity. I believe the Nyokum Yullo celebrations would prove a major catalyst towards achieving this goal”.

“The festival would further the goal of achieving communal harmony and unity and would showcase the rich and varied traditional culture of the Nyishis, the largest community of the state” the message added further.  He prayed Almighty to bestow peace, happiness, good health, and prosperity to people of Aurnachal and rest of the world.