Adding another feather on its cap, the border state of Arunachal Pradesh was conferred the Most Improved Small State award in terms of Infrastructure development by the media giant India Today in its 14th India Today State of the States Conclave 2016 here at a City Hotel yesterday. 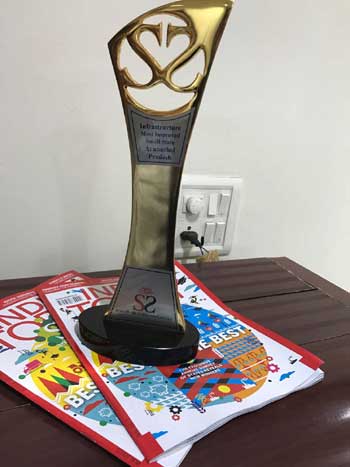 It may be recalled that the state has received a similar award from India Today in the year 2013 for Most improved small states’ category, in investment sector, macro economy and overall performance.

While thanking India Today Group for honouring Arunachal with the prestigious award, Chief Minister Pema Khandu dedicated the award to the people of the state. He beleived that this award is the outcome of hardwork put in my numerous bureaucrats, technocrats, panchayat leaders, public leaders, students and the entire 14 lakhs population of the state who have supported the government in all spheres.

During the panel discussion on infrastructure development, Khandu said that his Government was committed for a robust connectivity in the state with equal emphasis to road, air, rail and digital connectivity. He informed the gathering on various infrastructure development undertaken in the state and and also unveiled his future plans of growth in tourism industry, hydropower, industrial and investment corridors for Arunachal Pradesh.

He also made a special mention on sports infrastructure being created to nurture youths for sports curriculum besides laying emphasis on social sectors like health, education and basic utility services.

The award was given away by Union Minister for Finance Arun Jaitley to CM Pema Khandu.