LUMLA- A 92-years-old woman namely Mrs Langa Drema of Pamakhar village under Lumla Sub Division of Tawang district of Arunachal Pradesh was given her first dose of covid-19 vaccine at her residence, she was left out in first round of vaccination.

The covid vaccination mop- up team today covered three villages of Lumla sub division inoculating the left out and refusal villagers, a total of 77 villagers were inoculated.

The team today started mop-up round from Pamakhar village and later covered sakpret and Thonglek village also. Out of total 77 villagers 67 have been given first dose of covid vaccine,10 were pregnant mothers. 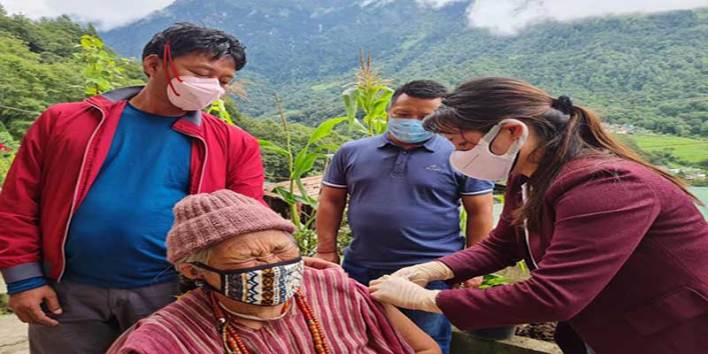 Besides vaccination DRCHO Tawang Dr.Rinchin Neema attended a pregnant lady and advised her to do normal  Ante natal checkups, and another lady was given medication and treatment.

The team will cover Kharteng, Bakhar and Phomang villages tomorrow on its fourth and final day of Mop-Up round informed DRCHO Tawang.