Heavy rains that pounded the state capital Area since last 24 hours has left trail of destruction along the over Artificial flood at Nirub river in Nirjuli, which prompted Chief Minister Kalikho Pul to blame it on the illegal constructions along the river course. Pul who visited the disaster site in Nirjuli that left a three-story shopping complex building in Nirjuli heavily cracked and approach roads to Nirjuli RCC bridge over NH 415 partially damaged, termed the disaster as “man-made” intervention . 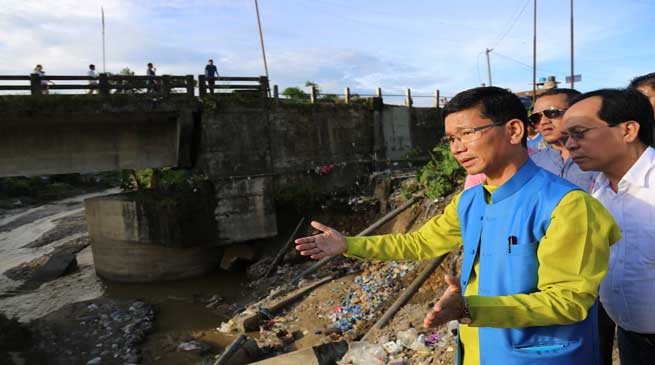 The Nirub river, whose water level had receded when the CM made the visit, had left the building almost on the verge of collapse. Also the damage to the approach roads were causing heavy traffic congestion over the bridge that had narrowed the two-lane way to single lane. The Chief Minister while surveying the damage observed that the riverbed was encroached by construction works altering the river’s natural course. The building that was left heavily cracked and on the verge of collapse had its back of the building erected over the riverbed. Also the altered river flow deviating from its natural course had washed away the concrete foundations of the approach road from below.

Sensing risk to the human lives and properties due to the cracked building, the CM ordered the occupants to vacate it immediately and to cut off all the electricity lines to prevent any further accidents. Pul then called for NDRF and SDRF personnel to dismantle the cracked building portion.

The CM met the owner of the cracked building and assured possible support and relief from the government and urged his support to carry out the work of dismantling of the building and construction work for protection walls.He told the people gathered near to learn from the disaster and advised them to build structures keeping in mind the safety of the environment.  “Our greed for money should not compromise with our safety. What use is our investment, if our hard earned money is washed away by natural disasters?” said Pul and expressed concern over callous attitude toward safety despite threat of harsh penalties.

The Chief Minister toured the damaged building portion and inspected the RCC bridge. He was accompanied by WRD Minister Kamlung Mossang, Tax & Excise Parliamentary Secretary Zingnu Namchoom, Education Parliamentary Secretary Tsering Tashi and MLAs Jarkar Gamlin, Markio Tado and Tamar Murtem. Pul asked the WRD Minister for immediate survey to be conducted the next day for building of three layers protection wall along the river course near the cracked building and the Nirjuli bridge that lay adjacent to each other. He directed the protection wall be of V-shaped so that the attack of river waves can be withstood easily to prevent damage to the walls.

The CM also instructed the department to destroy and dispose huge concrete blocks that lay on the path of the river, which could obstruct the water flow and cause erosion. On inspection of the damaged approach roads of the RCC Bridge, the Chief Minister called up Highway Chief Engineer Bora Ete and instructed for immediate restoration of the approach roads. He urged that the damage be attended to immediately so that normal flow of traffic is restored.

The Chief Minister also asked the WRD department to carry out survey of further damage along the Nirub river upstream in Ania village. He directed that wherever there are any flood damages, it should be immediately repaired. On ensuring connectivity for the village, the CM assured that a cement culvert bridge over Nirub river will be constructed within this year.