The Government of India has decided that the 500 and 1000 Rupee Notes  will no longer be legal tender from midnight, 8th November 2016. Prime Minister Narendra Modi made these historical announcements during a address to the nation on today’s evening.

Notes of one hundred, fifty, twenty, ten, five, two and one rupee will remain legal tender and will remain unaffected by the decision today. PM Modi said the steps taken by the Government would strengthen the hands of the common citizens in the fight against corruption, black money and counterfeit notes.

The Government has accepted the recommendations of the RBI to issue Two thousand rupee notes and new notes of Five hundred rupees will also be placed in circulation.

In his speech PM Modi said that these decisions will fully protect the interests of honest and hard-working citizens of India and that those five hundred and one thousand rupee notes hoarded by anti-national and anti-social elements will become worthless pieces of paper.

Persons holding old notes of 500 or 1000 rupees can deposit these notes in bank or post offices from 10th November onwards till 30th December, the Prime Minister announced. There are also some limits placed on the withdrawals from ATMs and bank for the very short run. 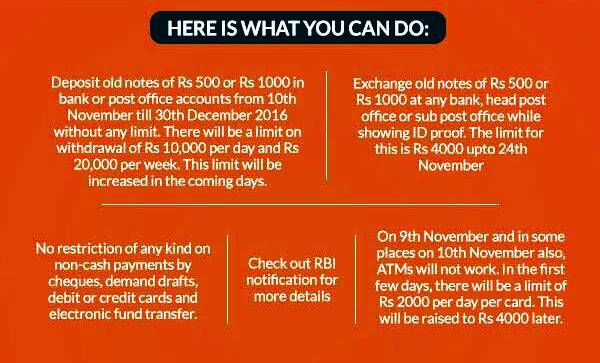 PM  Modi emphasized that there is no restriction on any kind of non-cash payments by cheques, demand drafts, debit or credit cards and electronic fund transfer.

PM Modi said that the efforts of the Government have led to India emerging as a bright spot in the global economy. India is a preferred destination for investment and India is also an easier place to do business in. Leading financial agencies have shared their optimism about India’s growth as well.

The historic announcements made by the Prime Minister will add value to the already thriving efforts of the Central Government.